November 14, 2022- New York, NY   In only two weeks, “The Little Bulker”, by Katerina Perganti Shaw, has become a maritime best seller.  Launched at the 15th Anniversary of the North American Marine Environment Protection Association (NAMEPA), the book educates children about the maritime industry.  Ms. Shaw has generously donated half the proceeds from the book to NAMEPA to support its educational programs.

“The Little Bulker” chronicles the construction of a dry bulk carrier in Japan, accompanied by details on what the ship carries, its components, size, and launching.  Further, it is an “eco” ship, which is a critical feature in the effort to reduce Maritime’s impact on the environment.  There is also a QR code for readers to follow the voyages of a dry bulk ship named “Athena”, which is trading today.

“Katerina’s book is the ideal way to introduce children to the depth and breadth of our industry” observed Carleen Lyden Walker, Co-Founder and CEO of NAMEPA.  “With the holidays coming, “The Little Bulker” makes the perfect gift.  Companies are purchasing the book for their employees and customers to help spread the message about the value proposition of the maritime industry to the next generation.”

“I am delighted that my book is being so well received” said Ms. Shaw when informed it had become a maritime best seller.  “It was my privilege to tell the story of the ship as it was being built, so it felt like a personal tribute to the ship and to honor the maritime industry.”

As the book is STEM (Science, Technology, Engineering and Math) enhanced, Ms. Shaw suggested that readers follow the voyages of a ship called M/V Athena to learn about geography, global trade, potential jobs and more.

To order copies of the book, go to The Little Bulker. 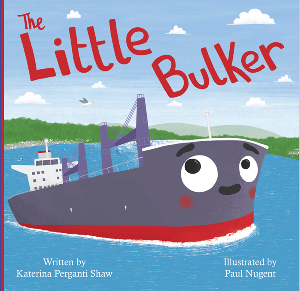