WASHINGTON, DC—The launch of a new United States open registry in the Virgin Islands will give the United States additional resources for protecting our nation, learned attendees to the launch on February 1st of A Revitalization Plan for US Maritime Trade, Commerce and Strategic Competition.  Included in the plan were the new registry, a transshipment hub planned for the Virgin Islands, a Maritime Venture Capital Fund, green shipping strategy, modernization of the maritime workforce and the development of multilateral partnerships on maritime issues.  Keynote presenters highlighted the need for shoring up U.S. maritime vulnerabilities both at home and abroad.

Opening the event, Morgan G. Dawicki, Project Manager for Northeast Maritime Institute, stated: “There is no question that our world is growing increasingly volatile, uncertain, complex, and ambiguous. We, the United States, are faced with the challenge to adapt and to continue to promote a rules-based international order. We are faced today with a U.S. maritime industry in decline over the past 75 years, while other nations are investing heavily in growing their maritime portfolios. We are the largest trading nation in the world, and yet control less than a percent of the world’s commercial tonnage. The economic and national security benefits from becoming more competitive in maritime trade and commerce are enormous.”

Speaking at the event was former Deputy Secretary of State, Ambassador John Negroponte: “As the first Director of National Intelligence, you can therefore imagine that national security and U.S. competitiveness are among my greatest concerns. For many years, we have been asking ourselves how to boost U.S. maritime competitiveness. As someone who grew up in a family with ties to the United States shipping industry, I'm keenly aware of how strong the U.S. maritime industry was after World War II and how it has dramatically declined since.  This past year, the public was made witness to our maritime shortcomings.”

Ambassador Negroponte continued: “The oceans have afforded our nation a considerable part of our prosperity, not to mention our security. With the United States being the largest trading nation in the world, and 90% of goods moving across oceans, it should therefore come as a surprise to many that the United States represents just .4% of the global commercial fleet-- less than half of 1%. This lack of United States ownership of shipping tonnage not only leads to a loss of economic opportunity, but lessens our ability to protect ourselves, and exercise oversight and control of activities occurring on the high seas. I commend this plan and this effort to shed light on this situation as a way to help the United States chart a way forward.”

America’s vulnerability was a key theme at the event: “It is time for all of us to give back and ensure that others have access to the same opportunities that we had. Those opportunities simply do not exist today as they did just decades ago. It saddens me to say that today, America is no longer a significant maritime nation. Under our direct influence, our nation lacks a resilient, secure and technologically enabled maritime supply chain, which leaves us susceptible to extreme market volatility and competitive disruption through normalized distribution channels.  We have little to no control over complex systems that disincentivize ownership of vessels operating under the current U.S. flag. To think our highly experienced and accomplished Navy is number one in the world, and yet our commercial maritime merchant fleet is just 21st in the world. The statistics are bleak,” said President Eric R. Dawicki of the Northeast Maritime Institute. “We have lost the ability to independently control our nation's economic destiny through strategic competition. Without an active plan, we have lost our ability to directly influence the actions of those that trade internationally, across the oceans, and here within our own ports. This is a jarring and stark realization.  Additionally, we are in a period of intense upheaval, and change. While the world has been dramatically affected by a disruptive global pandemic and faces ongoing impact of rapidly changing climate and natural disasters, we must also navigate through a diverse array of uncertainties that fuel social unrest, aggressive behaviors by foreign powers that are threatening peace at home, in Europe and in the Far East. And while we navigate through this change and adapt to the ambiguity, we must harken back to this one simple premise, that every great nation was built upon its maritime trade and commerce-- and we have watched ours slowly diminish over the last 75 years. In doing so, we have lost a fundamental quality that has been the north star of this great nation ever since it was founded; we have lost our ability to lead by the best of example, in the very industry that built this nation. We must lead with vision; we must lead with purpose. The time is now for the United States to demonstrate creative values-driven and effective leadership in the global maritime community that is propelled by principles and ethical engagement. We must lead with drive to incentivize those who want to operate their ships and move their cargo through an honest and transparent system where everybody wins, and, most importantly, the citizens of the United States win.”

One of the core elements of the plan that was presented included the formation of the U.S. Virgin Islands’ open international ship registry—the first, and only, international U.S. open registry.  In endorsing the Revitalization Plan, USVI Governor Albert Bryan Jr. stated “as an American citizen, I look at the numbers, and they make me nervous about our participation in the world trade market and our ability to move goods in good times or in bad as American people. The Virgin Islands is stepping up and we're saying we support this effort to give America back a bigger piece of this market.”

A similar view was shared by Rear Admiral James Watson (USCG ret.), who said: “I have had wonderful experiences with the U.S. fleet, which is predominantly in a cabotage trade along our coasts and up our rivers and lakes. I know that the international shipping industry is critical to our national security.  It concerns me that about 50 percent of the world’s ships are in three open registries. What if some adversaries were to have influence on just one of those and use that to their advantage and to our national disadvantage? I just think you need some counter effort of some kind.  This strategy actually puts some really good ideas on the table.  I think you need a national flag involved in that international global trade that goes on and to have that sort of confidence for our own well-being that some adversary just won't sweep all the other flags up and say, ‘U.S. you’re too late to the to the table to get what you need for your national strategy’.  We need to act now, and I think we need to have a plan, and this is the only plan right now.”

Security specialist, Northeastern University Professor Stephen Flynn, former President of the Center for National Policy, and senior fellow for National Security Studies at the Council on Foreign Relations, observed: “There is no other critical infrastructure that the United States is as dependent upon, for which it has so little ownership, than the global maritime transportation industry. If you think about any of the other sectors —aviation, telecom, insurance, finance--you have major corporations who are driving those industries who are innovating those industries, and to whom the US government can turn from time to time to say, ‘How do we partner?’ to deal with some of the challenges that those industries and the nation faces. In the case of the United States, though, when it comes to the maritime transportation logistics sector, there really isn't that opportunity and it has incapacitated, to a large extent, the US government's ability to work with international private partners on security matters.  Our national security protocols simply get in the way of forging deep collaboration and coordination to strengthen the security of the maritime sector.”

Summarized President Dawicki: “The United States is at its most vulnerable point security-wise since I can remember, with the instrument of economic development the best possible facet of security that we could implement. We only have to scratch the surface of history to bring in the U.S. Virgin Islands and the fact that they played such an important role in 1917 protecting us against the Germans, but more importantly they provided such an important role to the psyche and intellectual capacity of Alexander Hamilton who created the United States Coast Guard.  We are referring back to that history to create an economic development platform that will secure the interests of the United States not only at home but abroad.  For me, this plan is the one instrument that we have seen in decades that will catapult the United States back into the maritime sector as a global player.”

Go to US Maritime Revitalization Plan Launch to view the full event.

The Center for Ocean Policy and Economics (COPE) is hosted by the Northeast Maritime Institute – College of Maritime Science: Created to tackle some of the ocean’s “wicked problems.” A culmination of years of extensive research and conversations with leading experts in the maritime and ocean related fields, COPE is a facilitator for cogent maritime and ocean policy and economic development project initiatives linking academic, corporate, non-governmental, and governmental partners to create impactful solutions.  Additional information can be found at COPE. 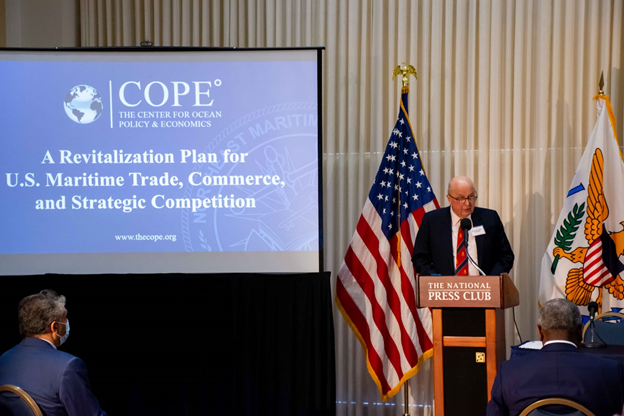